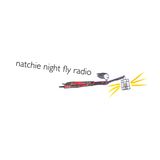 Never miss another
show from natchienightflyradio

Natchie Night Fly reflects a broad range musical taste including ambient, indie pop, jazz, agit-pop, electronic, interviews with local NYC stars, live performance, discussion topics and humor.
Natchie: “The Aussie” - Nadia has been singing professionally for 25 years. She hails from Sydney, Australia. She now resides in NYC and has been here for 17 years. She was the singing voice of the International UPS Campaign "That's Logistics" that ran for 3 years. She has shared the stage with many of music's greats including: Sting, James Taylor, Billy Joel, Bruce Springsteen, Feist, Sheryl Crow and Lady gaga just to name a few. She has performed at Carnegie Hall as well as many TV shows including SNL and The Tonight Show with Jimmy Fallon. She has released many albums and continues to write perform, play and draw.
Harvey Jones: "The Brit” The Synthesizer is the indigenous folk instrument of my culture. I’ve been dragging the instrument in its various forms across studio hall