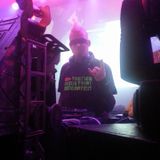 Never miss another
show from Nachtraaf

Nachtraaf is a Dutch Industrial DJ.

Started DJing in 2012 at the legendary venue of De Vinger in The Hague in at the Goth Class-X. Followed shortly by starting an own event named Gotikus Industrialis.

Seeing at the time younger DJs had nowhere to play. There was only one option. And that was to break the status quo.

These things did not go by unnoticed and piqued the interest of several organizers of events and festivals. Followed by setting up bigger events called Blacksun Corp. featuring big-name bands. And starting a monthly radio show at Radio Tonka (92.0 FM) called Industrial Generation. Co-organizer of LUVST parties since 2015. And in 2019 started a monthly radio show with partner DJ FritZ at Dark Asylum Radio.

Having performed all over Europe and Japan, from small events to the major festivals.