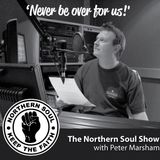 Never miss another
show from The Northern Soul Show

I've worked on professional radio stations up and down the country including Minster FM, Lincs FM and Yorkshire Coast Radio.

I set up my own station in Hull back in 2007 and a couple of years later we beat off numerous commercial and BBC stations to win the SONY Gold Award for Best Local Radio Station in Yorkshire.

I now present the weekday evening show and the Northern Soul Show on www.ClassicOldies.co.uk.

The Northern Soul Show plays classic, rare and special versions of Northern Soul songs along with some Motown favourites too. The show is heard on over 50 radio stations in Britain, Australia, France, America, Canada and Spain.

If you work in radio and would like the show on your schedule then get in touch.