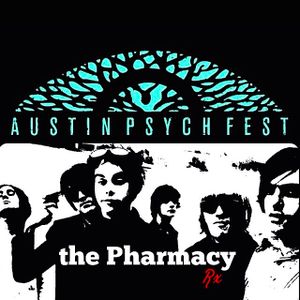 This week we have a special episode dedicated to the Austin Psych fest .
Austin Psych Fest is a "Psychedelic" music festival started by The Black Angels in 2008 .
The festival has featured ; Roky Erickson , Spectrum and this years headliners - The Zombies (who we featured on the Pharmacy # 19 ) , plus this weeks special guests The Brian Jonestown Massacre ... The Brian Jonestown Massacre are an American underground psych band who formed in 1988 .
This week we have a conversation from three view points , through the eyes of the band's leader and founder ; Anton Newcombe and past and current members ; Ricky Maymi and Jeff Levitz ... This week we also have the band ; White Hills ... White Hills , are also playing Austin Psych fest , and have recently made their screen debut in underground director Jim Jarmusch's film ; Only Lovers Left Alive ...

Loving your playlist! The 'Just Out Of Reach' coupling for instance. I just watched 'Bunny Lake Is Missing' again which features the Zombies' track, and it has some great locations and atmosphere; a proper magical old London movie.

Let's hear more. This is great

Your shows are THE BEST. Loop!!

love this station for old obscure artists, and then you play Crocodiles. SOLD.

Why thank you . G

That was a good radio show! The music was great!

All the questions you ask are spot on. Really well thought out, non of this "What is your favourite" shit. Keep it up man.

excellent and entertaining! Thanks.