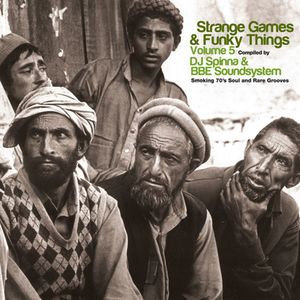 The Strange Games series...which began in the summer of 1997, represents the blueprint for modern R&B and rap music. It joins the dots between 70's soul, 80's rare groove and 90's mass market hip hop. This compilation contains a wide variety of styles of tracks, from classic dance-floor fillers as well as lesser known delights. A more accessible diggers delight if you wish with an emphasis on quality tracks and not just songs worth having for a 2 second sample. Featuring a much more worldly selection than its predecessors - tracks by the multi platinum selling WAR to Sylvia (founder of Sugarhill Records) sit side by side with world music underground icons like C.K. Mann and Francisco Aguabella. This volume is the 5th in a series of compilations that appears to have the widest appeal of all BBE's compilations and proves to be even better by the fact that there is a bonus mixed CD by the one and only Dj Spinna!

I'm definitely feeling that 70s, 80s and 90s groove thang! This came in as one of my Weekly Updates to check out. I'm glad, I did!

I have always loved the Strange Games & Funky Things from the vol 1 when it first started. This one is great too.

What a nice compilation ! Want to discover more from DJ Spinna

Ive been listening to these compilations for years, they are all classics.