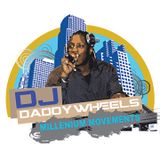 Never miss another
show from DJDADDYWHEELS

Born in England , raised in Brooklyn , Ny , and instilled with old school Guyanese values/ DJ DaddyWheels has taken his passion for music and mastered the art of playing what the crowd wants to hear.
Starting in the mid 90’s crates (Yes new dj’s Vynil !!)for his cousin and original mentor fire int’l, Wheels spent endless hours listening to learning how to select reggae and socal tunes.
Once he was ready, it was time to let the world decide if he was up to the task. As a business minded individual, wheels promoted events throughout the tri state, placing himself in a position to be heard alongside many on NY’s premier DJ’s.
As His exposure expanded DJ Daddy Wheels branded his Carribean Dj skills under Millenium Movements sound, and was off to college in NJ.
Training to be an official well rounded Dj began. He gives thanks to his nephew DJ2G’s, who took him under his wing, and added the additional tools to master Hip Hop, R+B, Club Classice, and Baltimore Club.