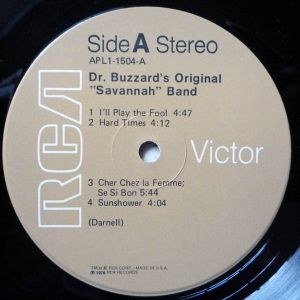 This - and its follow-up album "Dr. Buzzard's Original Savannah Band Meets King Penett" - offer a remarkable mix of 1940s swing, rhumba, cha-cha, and calypso, 1970s disco, sexy vocals from Cory Daye, lush orchestrations, and complex lyrics are so original and complex that they really produced something that goes way beyond what we think of as disco. My personal favourite track is "The Gigolo and I" from the second album, with vocals in French and an insane narration about the history of Manhattan from Ms. Daye. RCA issued both albums on a single CD.

Love all off the song's on this CD