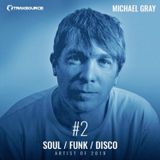 Michael Gray is a hugely respected and established British DJ and Music Producer, and is also one half of the dance music production and remixing duo 'Full Intention' who have been at the forefront of Dance music since the early 90s. His huge hit
“The Weekend” is still loved and played by the biggest DJ’s the world over.

London-based Michael is one of the most in-demand Artists on the global dance music scene today. Having relaunched his solo career as Michael Gray in 2018 to pursue his original love of Disco, Michael has already become the world #2 Soul/Funk/Disco Artist on Traxsource in 2019 - an incredible achievement and a worthy accolade for Michael's world-class production skills. Throw into the mix his awesome DJ sets at Glitterbox, Downtown Disco etc and you start to see the full picture of one of the UK's most talented Artists.

He has a monthly show on Mi Soul Radio.