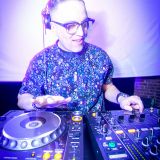 For Those Who Know - Maximus C - 2019
by Maximus Carnivorous

Adventures in the movement
by Maximus Carnivorous

Maximus Carnivorous was born in Santiago, Chile. He first became acquainted with the B-boy LA underground Techno and House music movement in the
early '90s. Music has always played an important role in Maximus' life he always knew he would be part of a Music Movement (in his case....the LA Underground).

Maximus became involved as a promoter at an early age for various events in LA. He became obsessed with finding his own sound, he became a connoisseur for Electronic music (House & Techno)

He is a storyteller, a vibe creator spreading MUSIC & LOVE through every journey of sound from a unique eclectic taste ranging from blues, reggae dub, disco, funk and house, and techno.