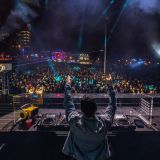 DJ MAX E
IN THE MIX

From house parties to major venues, Quebec City has witnessed the ascension of one of his most talented and respected DJs. Widely known as “Quebec’s finest Open Format DJ”, MAX E has an impressive resume. Driven by his passion for music, he performed all across the Province of Quebec. He left his mark in Montreal, Gatineau, Trois-Rivières and Quebec City to name a few. Thereby, he gained popularity and notoriety over the years. His well-deserved reputation allowed him to play alongside top-tier international artists such as DVBBS, Loud Luxury and Steve Angello. His undeniable versatility, his skills and his knowledge set him apart. Promoters know they can count on him for any event. That’s why, he was in charge of warming up the crowd at both Loud and Flo Rida concerts. On top of that, he spinned multiples times at Dagobert, Maurice and Délice Nightclub since he started. In the last few years, he’s been playing an active role in pushing the boundaries and the standards of Quebec City’s