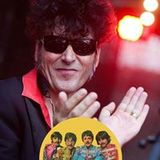 Dubliner Mark Gilligan has been living in The Netherlands since 1992. He is a well known musician and was the man behind the Deventer Irish pub festival since 1999 until he sold his company a few years ago. Since then he has played with international artists including The Mahones & The Urban Voodoo Machine.
In 2003 he was diagnosed with Multiple Sclerosis & as the disease progressed, it robbed him of his ability to perform & play his beloved instrument the clarinet. But not one to be hampered by the onset of M.S. he has always founded a solution to continue in the music business. Last year he started his monthly club night “Death Disco” at the BWH & has performed his club night at prestigious venue such as the Paradiso, Klokgebouw as well as in London & Ireland.
Gilligan is immersed in a world of Rock and Roll & has been in the company from Bono to Johnny Cash as well as recording & playing with musicial illuminaries like Noel Redding (Jimi Hendrix Experience) to Ronnie Drew (The D