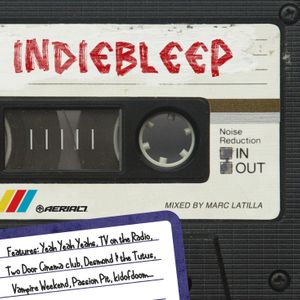 Kidofdoom, The Horrors, TV On The Radio, Amanda Blank, White Lies and more.

This is the 30 minute edit of the INDIEBLEEP album done for 5FM which was played on the Fresh Drive ULTIMIX@6 on Monday 4 April 2011.
The CD was released in South Africa in November 2010 and can be purchased here:

The album was mixed live on a pair of CDJ800s in July 2010. The edit was done in Jan 2011 taking the orginal mix of just over and hour and cutting it down to 30 mins using Sony Soundforge. Most of the editing invloved chopping out verses, choruses and extended bits. There are 3 tracks from the end of the CD missing from the edit: Kele (from Bloc Party), Two Door Cinema Club and San Francisco's Kite in the Air.