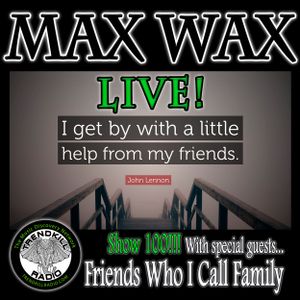 Absolutely stoked for tonight's show! I'll be joined by one of my best friends I've made since moving from Texas, my best friend from high school, my best friends from college (all three of them) and they're picking all the tracks! It's going to be a RIOT!!!

Some random thoughts whilst listenin':
.
Killer opening set! I certainly enjoyed Bill's favorite track; very cool!
.
Uh-oh, hot mic on Scott during the Crue, Lol! Had a feeling you'd get messages to let you know. The over/under in Vegas was one song until resolution :D
.
"Flockin' and rockin'"! Sounds like a good name for a TkR show! Lol!
.
For those about to rock? That's been the Lightning's post home game victory song for quite a while. Definitely perfect for the start of a radio station! #connectingTheDotsCuzIcan
.
Wow! The karaoke version of "Fairies Wear Boots"! I could've used that back in the 90's... (it's a long story).
.
I saw a Page/Plant, 90's reunion, fully electric show in a packed, indoor arena in Kansas City; that was by far the loudest audience I EVER heard! And the show was unbelievably awesome!
.
Congratulations on your 100th show, Mack! May the next 100 be as much fun!