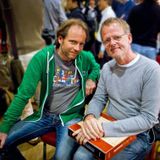 Macca Podcast Show No. 73 [A unique Macca live show starting in 2020 ending in 1962]
by RadioheldReposted

Macca Podcast is a radioshow in Dutch from Arjan Snijders and Koop Geersing about Paul McCartney. Each show contains new music (including bootlegs, demo's, live stuff and many never released songs). Never is one song played twice (or at least not in the same version, that is). Over 1000 songs in over 70 episodes at the beginning of 2017 and still going strong. Collect them all, we will release all the previous episodes here. Enjoy! And check https://www.facebook.com/MaccaPodcast