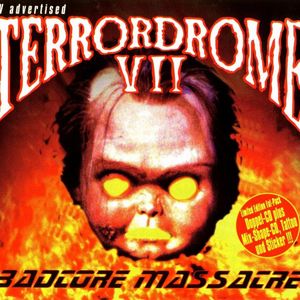 This show was 27th in the global hardcore chart.

The Terrordrome compilation series is legendary. I don't know about the international markets, but at least in Germany, and I'm sure in many other countries as well, Terrordrome was the 2nd biggest compilation after Thunderdome, and in the 90s, "Gabber" and "Hardcore" to most people were synonymous with Thunderdome and Terrordrome.
Terrordrome did not just cover the "big hits" of that era; but supplied the scene with the hottest tracks from the more underground areas, and played a vital role in building then new genres such as Speedcore and Noizecore with their range of tracks. Before the days of high-speed internet, MP3s, social media, compilations like Terrordrome spread the newest sounds and gave the Core audience their much needed stuff. Terrordrome definitely played a central role in the Hardcore network during its heyday.
This mix focuses on the Terrordrome issues 5-10, when there was a notable switch in sound and source for the series. Enjoy!

Thanks! Unfortunately I´ve just got 1 Terrordrome album in my collection: Terrordrome X. In the Netherlands we had a whole bunch of hardcore and terror-cd´s: Thunderdome, Tunnel of Terror, Xtreme Terror, Hellsound, Eurthquake and so on. Terrordrome wasn´t easy to find in the record stores over here.

Wow, really? I didn't know it wasn't a thing in the Netehrlands. I still remember the record girl from the department store Hagemeyer urging me to buy Terrordrome 3: "Earthquake is way to soft for you, you need this CD - it's top notch if you're going for hardcore compilations!" It was just in a little German town (Stadthagen), but the record store employees knew a lot about dance music and harder styles...

So right and still I play Badcore Massacre. Its timeless.. In the Uk we only had the double CD version, but I have the 3 CD with the cutting wheel shaped mix CD. Really is the roots of Speedcore and its impressive how this has stood the test of time as if it could have been created yesterday,much more so than the Thunderdome series ,Its as if I had been deceived by ID&T once I heard this!!