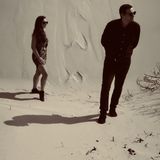 Hit me
by Local Suicide

The history of the DJ duo and couple Local Suicide stretches back over a decade to the year 2008. Since meeting, Munich-born Brax Moody and Thessaloniki native Vamparela have collaborated together on projects ranging from DJ sets and bands to remixes and music production, all culminating in the conception of Local Suicide in Berlin. The rhythm and dynamism of Munich’s burgeoning hip-hop scene is merged with the grit of the back-alley indie clubs lining the streets of Vamparela’s hometown to give birth to the distinctive Local Suicide sound, an energetic fusion of new wave, slow techno, post disco and acid house that they themselves like to call ‘technodisco’.