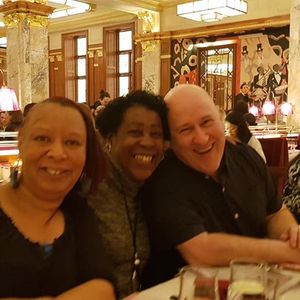 ‘The A-Z Of Mi-Soul Music’ occurs every Saturday at 1.00pm. Mi-Soul is online and DAB all over London & Brighton playing black music of every genre from 60s to current day. The show is a two-hour feature on a letter of the alphabet, containing tributes to significant artists. Lindsay Wesker has been a professional DJ since 1979 and a radio broadcaster since 1982, starting out on pirate stations such as Invicta, LWR and JFM, before moving on to unlicensed Kiss FM, then legal Kiss 100 FM. Lindsay worked at Jazz FM, BBC Radio London (GLR), Solar Radio and Colourful Radio, before finally arriving at mi-soul.com. Lindsay joined MTV in 1999 as a music programmer & created MTV Base, MTV Hits & MTV Dance. Lindsay now teaches ‘Music Industry’ at Point Blank Music School. In addition, Lindsay and Mi-Soul presenter Dave VJ have written a book about the history of UK black music radio entitled ‘Masters Of The Airwaves’. Lindsay has just self-published his 3rd novel ‘Keep It Fun’ (via Amazon.)

Thanks for listening! Hope you're well? x

Lindsay you are truly a master of your craft! I could only think of The O'Jays but of course there are so many more, as featured in this show. Love the Odyssey tribute! Hats off to you Sir!

Aww, you are too kind! The O'Jays don't even feature in Part Two! Thanks for listening! x