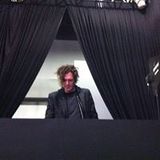 Laurent L aka Lochoi builds sounds and devices like instruments he uses for his compositions . He started to Dj in 94 and soon after was experimenting with samplers , Fx processors and multi tweakable machines . Since 2003 he is the sounder and programmer of the audio-visual duo *LLND .

*LL’s dj sets are a blend between electronic dance music , field recordings and live remixing .
In the 90’s he took part to the first outdoor raves , 2001 he played for the opening of the Bed club in Miami, 2004 at the opening of shanghai Biennale . He played around the world with his sounds , in Berlin , New york, Chicago, Paris , Italy , Poland, Belgium, Holland …

You can expect a trip into the Cosmic life of dance music .