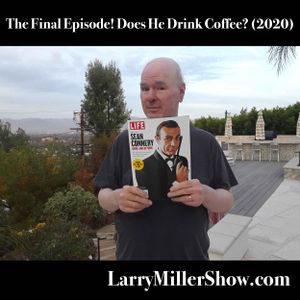 The Final Episode! Does He Drink Coffee? (2020)by Larry Miller Show

Dear listeners, welcome to the last episode of The Larry Miller Show! We have really enjoyed bringing the show to you and being part of this fun with all of you. For the grand finale, since it is December, we have decided to go out with our annual holiday tradition of Larry re-telling his story, "Does He Drink Coffee?" Plus, Larry does a big tribute to the late, great Sean Connery. Also, Larry tells his favorite joke of all time and recites his favorite Robert Frost poem from memory. As you may have noticed, we haven't had a new episode in a few months. We've been unable to find a way to produce the show safely in these difficult times, as pre-production largely consists of Larry and his producer Colonel Jeff sitting in a small room for half a day, drinking decaf and talking. They talk mostly about Wagon Train, as if that's productive somehow. But that's the process. So, we've decided it's time to roll up the old circus tent. Thanks so much for listening and thanks for all of the yuks