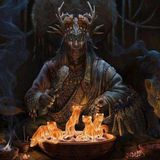 Never miss another
show from Psycroftॐ

Talented Czech producer, member of the Kamasutra crew, with Slovak roots started in 2014 like a DJ. One-year latter he started to compose his own music. He didn’t wait long for a success. He made first release in 2016 on the Czech label Mystical Waves Records and Luk-Si Records. In 2017 he released the EP, Enter the Matrix (Digital Drugs Coalition) and Life is the Universe (again Liberec Luk-Si Records). His newest official releases go out in 2018 on compilations Psychedelic Czechoslovakia (cooperative Mystical Waves and Psyalaska Tribe) and Nandali Vindali (Synaptic Dreams Records). From this time, he gathers inspirations and now he focused on the new creations and goes around the Czech and Slovakia festivals and clubs scenes. His styles is characterized like dark psy with lots of forest elements.