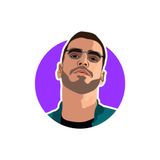 Konstantinos Kalogeros, (born December 14,1990) comes from Corfu. From an early age he has followed musical and clubbing events. This passion of his developed further with his involvement in the field of djing at the age of 17. He made his first professional steps though, after moving to Athens at the age of 20 in conjunction with his studies. Approximately a year later , he became a member of the Thriller Nights parties where he had the chance to show off his talent playing at some of the best clubs in Athens and Greece. Then he cooperated with the Can’t Get Enough party in which he was resident Dj for 3 consecutive years. Alongside he creates Booty Panda, a duo of Djs with music productions such as ‘Zoo’ in collaboration with Midenistis and ‘Waga’ (Madwalk 2016 Anthem) released from Panik Records. He has participated in festivals like Colour Day Greece and Dreamland. In 2019 he becomes resident Dj at 54 Dreamy Nights club in Corfu.