KEXP Presents Midnight In A Perfect World with HARD FEELINGS 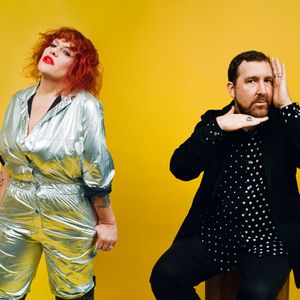 HARD FEELINGS is the new collaborative project of NYC-based singer/songwriter Amy Douglas and London-based producer/musician Joe Goddard of Hot Chip and The 2 Bears. Their self-titled debut album -- released November 5th via Domino Records -- finds itself positioned fluidly at the intersections of new wave, synth-pop, and full-on disco glory for a raucous sound that’ll make you dance, make you cry, and make you feel.

In regards to HARD FEELINGS' eclectic and groovy guest DJ mix for Midnight In A Perfect World, Amy writes: "I'm calling it the KEXP "Gobeli Goddess Mix." This is definitely influenced by HARD FEELINGS, but also by KEXP and the music that the station supports, as the mix features all femme vocalists! Most notably I named it for Abbie Gobeli, a DJ there that has quite literally supported EVERYTHING I do. Here's my thank you, tip of the cap for her."

Thank you for the best mix ever!