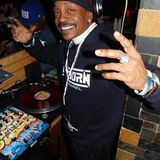 DJ Kevie Kev Rockwell was born in Harlem, New York. After a while, his parents moved to the Bronx in an area called, "Marble Hill". While attending John F. Kennedy High School 99 Terrace View Ave, Bronx, NY 10463, Kevie Kev Rockwell started entertaining his peers with a simple boom box radio playing original mixed tapes that he had created on his turntables and started everyone he was called A Push Button DJ. While around this time frame, the first generation of Hip Hop MC’s and (DJ’s) were emerging and DJ Kevie Kev Rockwell was destined to become one of its most well known pioneers. DJ Kevie Kev Rockwell’s talents were nurtured by Grand Wizard Theodore and Grand Master Flash. DJ Kevie Kev would observe the hand movements of his mentors Grand Wizard Theodore and Grand Master Flash. Then narrate their actions like Spin Backs ' Scratching ' Speed and Finesse Needle Dropping and how to Rock a Crowd with a Mixer and Two Turntables . These motions formulated new rhythms in sync with the