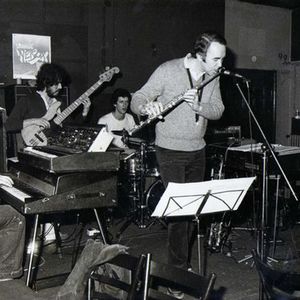 Peel mentions last night going to the Newcastle/Sunderland area, "one of my favourite parts of the country", where he saw Medicine Head and Mott The Hoople perform.[1] . But he says he'll be back at the Nag's Head, Wollaston, on Friday evening.
Claims Medicine Head's LP has a nice sleeve design.
Says Crazy Horse's self-titled LP is one of the best he's heard in a long, long time. Another Neil Young collaborator, David Crosby (from CSN&Y), is also played; he calls Crosby's solo LP "a remarkable record".
Mentions after Steeleye Span's 'Let's Dance', originally done by Chris Montez, that he interviewed the latter in California when working for KMEN radio in the 60's. Also, that the Pig has the original version on vinyl.
Calls for musicians to compete in Rockortunity Knocks, for a chance to have their music played on Top Gear, by sending their recordings to John Walters at Radio One.
Result of the day's FA Cup semi-final is given (several times): Liverpool 2 - Everton 1.[2]