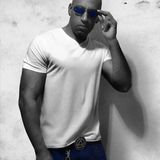 With a career spanning from New York and New England to Las Vegas and Phoenix, Kaine Legacy is a world class music producer, remixer, and nightclub DJ.

Born and raised in Brooklyn, NY, Kaine studied sound engineering before relocating to New England where he become a top-rated nightclub DJ and remixer. Kaine Legacy has also lived and worked in Las Vegas, and now lives in Phoenix, AZ.

Kaine has played at many popular venues, and has produced records for many popular urban and dance artists. He is also formerly a mixshow DJ for New England hit radio station, 105.5 fm (JYY).

As a producer, Kaine works in various genres, including EDM, Hip-Hop, Dance/Club, and Top 40. As a DJ, Kaine has a style that appeals to the masses (and packs dancefloors), blending everything from dance/EDM to reggae/reggaeton to rap.