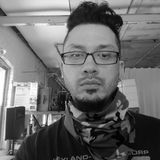 Never miss another
show from K-Rai

I got into creating electronic music & dj-ing in the reverse order of most folks.

Electronic music maker since 1995, had an industrial band for several years (hauling out desktops!), went solo throwing down when laptops were foreign to the scene, later participated in laptop battles. In 2006 formed the Live EDM duo The Megadrives.

I spent almost a decade producing before getting into mixing, and what got me into mixing was playing out solo mixing all my own material between 2 laptops. Only in the last few years have I gotten into spinning other peoples music.