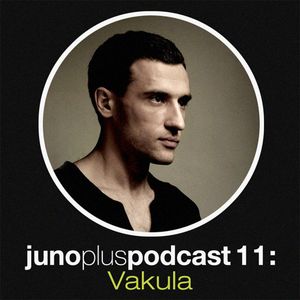 Juno Plus Podcast 11 - Vakulaby Juno Plus

This week Ukrainian producer extraordinaire Vakula takes the reins for an hour long mix consisting entirely of his own productions - many of which can be heard here for the very first time.

The name Vakula was first mentioned breathlessly at Juno Plus HQ in mid 2010 - yes we slept on the Uzuri release - following his appearance on Firecracker's highly collectible EP series. It was the first time the imprint had reached outside its tight knit family of Scottish producers, and it sparked a relentless procession of releases for the likes of Dekmantel, 3rd Strike, Best Works, and, most recently, Firecracker's Unthank sub-label.

We now regard Vakula as our favourite Ukrainian since Mila Kunis, and his Juno Plus mix showcases the full breadth of his production nous, from glorious stuttering piano lines to bubbling acid and Detroit style chord movements.

Hello VaKuLa, it's Poumchak, do you remember my??
listen new set : http://www.mixcloud.com/poumchak/poumchakmix2/
I liKKKKKe your sound & sets, thanks you.
Bye bye

More from Juno Plus