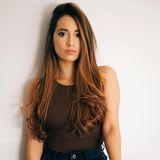 Juli Aristy is a DJ Producer born in Colombia, has being playing since 2008 and after years of dedicated hard work and uncompromising dedication to music she played in some of the best South American and European clubs.

For years JULI ARISTY has been absorving the clubbing atmosphere and developing a strong connection to the audience making her one of the top South American DJs through the past few years.

Juli has Releases in labels such as: