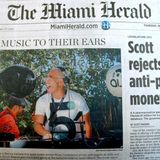 With over two decades of experience on the turntables, it has been in the last fifteen years that JP Rigaud gained worldwide recognition. Unsatisfied with the musical growth in Miami Beach during the early 90s he decided to take matters into his own hands. He opened Zanzibar, one of the first venues on the beach to host the world’s top drum & bass DJs. There J.P. created the first successful weekly drum and bass night in Miami Beach and a pulsing underground music scene. Always on the up and coming with electronic music, he found a way to introduce different genres of sounds to a once wasteland of musical taste through his venue whether spinning or hosting new acts . His creativity, love and enthusiasm for new music have contributed to the evolution of electronic music on the South Beach scene & his passion leads him around the globe DJing. JP Rigaud became the first resident DJ of Nikki Beach Club in 1999, the infamous venue, known as the first European style beach club in the U.S.