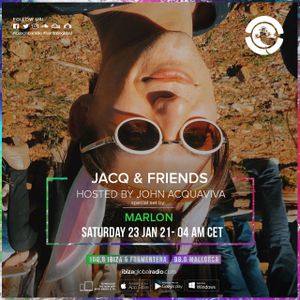 This show was 100th in the global deep house chart.

Marlon has been steeped in electronic music and club culture since he moved to Ibiza as a kid. As the son of a stage producer for the island's largest and most notorious party, Manumission, he was often around dancers, drag queens and circus performers. But instead of diving into a party animal lifestyle, a young Marlon spent hours in his bedroom studying music production and the bass guitar. Over the next few years, he toured professionally in Europe with Nightmares On Wax and recorded with Morales, the Ting Tings and Duran Duran's Andy Taylor.
With his professional bass-playing career on hold due to carpal tunnel syndrome, 18-year-old Marlon took up DJing and started to collect records. He started to amass a collection of drum & bass, old-school UK tech-house, Detroit techno and breakbeat and play on Ibizan radio stations or at local after-parties. He has formed a duo with Luca Cazal as “LVCA & Marlon” so we are looking to hear their first releases.