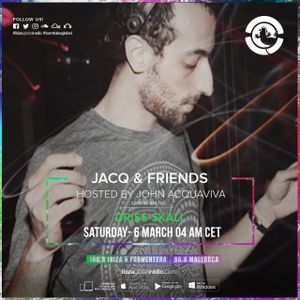 Driss Skali is a music producer and DJ. Originally from Morocco, he threw the first electronic music party there in 1997, and due to its success, followed with a beach party in 1998 with 2,500 attendees. Nevertheless, he left Morocco for Montreal in 1999. Attracted by the music scene in Canada, his goal was to start a DJ career somewhere with better access to music and gear. Despite moving, he worked with the collective Moroko Loko for years and maintained a residency at Pacha Marrakech, and to this day still keeps an eye on the development of the scene in Morocco. Driss founded Who's Who Music, a company that organizes events through talent buying and curation in the city of Montreal since 2005. He also co-founded the record label Casbour Records in 2012, while intensifying touring as a DJ through Europe, Morocco, and North America. From 2010 until 2016, Driss worked as the talent buyer and curator for the Family Piknik Festival in Montpellier, France. Check out his latest mix for us