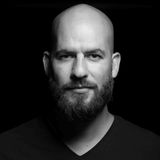 Never miss another
show from joelpujoldj

Joel is a Techno DJ from Barcelona, based in Berlin again since 2019. He grew up in Spain where, in his early days, he discovered his passion for music, which started with listening to indie and britpop in clubs and then lead him to study Music theory in the University of Barcelona. Afterwards, he moved to Berlin for 10 years, where he soaked in the electronic music scene.
In 2014, he moved to Barcelona and Buenos Aires for 2 years each city, where he has been developing his sound with a strong taste focused on acid melodies and specific harmonies. One of his main projects, “Deconstructed Techno”, a very specific way to play Techno and event, showcase Joel’s personality and style while serving as a reminiscence of his musical baggage. Being an eclectic artist, Joel loves powerful drums, 129-134 bpm, bright percussions, deep basslines and sustained notes — always seeking the best sounds, his personal style makes it easy to connect with the crowd, creating an emotional music experience.