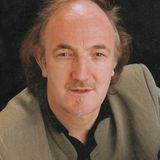 Never miss another
show from The Joe Jackson Radio Archive

I am a newspaper/magazine interviewer who choose to follow that particular path in life purely to meet my music heroes, starting with Leonard Cohen in 1985. I have interviewed 1,400 world-famous celebrities, not all of whom, I hasten to add, were my heroes.

I also have had a parallel career as a broadcaster, working for Ireland's premier national radio station RTE Radio 1, first as a presenter and more recently as a presenter/independent producer. in 2018, my Elvis show, Conversations About the King, was nominated for an IMRO award in the 'Best Music Documentary' category.

My previous programmes include The Years Go Pop, a 26-hour history of pop culture, People Get Ready, a 52-hour series about the greatest music acts of the 20th century, and Under the Influence, an interviews series with musicians, which was nominated for a PPI award. I want to make all those shows, plus the master tapes of interviews, available for private listening purposes or licensing. All are my copyright.