Break It Down Vol 1 - classic hip hop and original samples 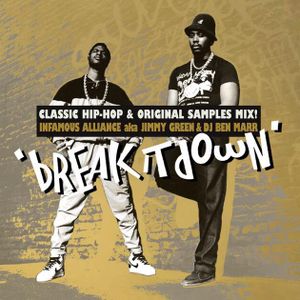 Jimmy Green and DJ Ben Marr aka Infamous Alliance present Break It Down!
We've been doing the Break It Down nights for two years now, and this is a condensed version of some of the music we've played on those nights. DJ Shadow, Beastie Boys, A Tribe Called Quest, Wu-Tang Clan, Dilla, De La Soul, Golden Era Hip Hop, Classic Breaks and Beats, Public Enemy, and DJ Premier / Gang Starr.
We use four decks, some tracks are played all the way through, some tracks are cut up and messed with, but we play the original samples and the tracks that sampled them. Biggup The Smokehouse in Ipswich UK for hosting us.
More nights coming soon!

One of the best mixes I’ve heard in a while. Perfect track selection, well sourced samples and breaks and fantastic attention to detail. All topped of with some tight turntable skills. Killer mix!!

love it .. any chance of a nice quality download of it??

Thanks for the drop real hiphop!!!