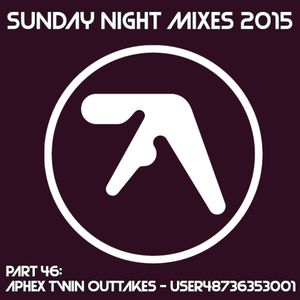 In late January 2015 an anonymous user posted 112 tracks on Soundcloud (later removing two) under the name "user48736353001"; this was linked by the official Aphex Twin Twitter account. The tracks are therefor widely believed to be Aphex Twin outtakes from the 1990s.

Are these tracks really made by Aphex Twin? Judge for yourself with this 30 minute Sunday Night Mix of this rough rare material!

Would love to see more of this.

thanks for your introduction to afx. here is the noko posting about the master with old dat/tapes from the 90s, if you like hear: http://www.percussionlab.com/sets/nokogiribiki_131/rich_on_old_afx_tapes

Thomas Joergensen aka GadaGong7y ago

Unavailable in my country!! Grr!

http://hola.org/ will fix your problem!