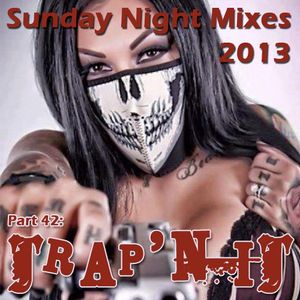 Time for another genre special here in the Sunday Night Mix #42: TRAP!

Trap originally has its roots in Southern Hip Hop.The lyrics covered topics about life in "the trap", drug dealing and the struggle for success. The music itself is typified by its trademark sound, which incorporates 808 sub-bass kick drums, sped-up hi-hats, layered synthesizers, and "cinematic" strings.The past few years however more commercial and EDM oriented producers got their hands on the genre, feeling its 'the next dub step'. The style got viral with the Baauer's track "Harlem Shake" that had everyone from college kids to seniors dressed as my little pony shake their asses of in a YouTube internet meme

Thanks to http://www.trapmusic.net/, Oliver Decks (Damnboyz!) and all on Soundcloud for great tracks

site man, this is zef

how fuckin wicked is the zef style?...love it and die antwoord can do know wrong...so hot...nice mix and selections fresh...

Thx :D Thats what I do it for!