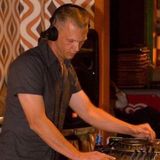 Dj Quasar started spinning records since 1985.
His first steps into the Dj world where at local clubs and party's.
Within a few years he decided o start producing his own music.
His first record saw the light of day in 1991.
Many more followed after that almost all under differen names.
The biggest projet was done for Polygram, a doube CD with"Manga"as theme.
in 1997 he got involved in mixing for Aerobic instructors and soon was ask to make monthly Aerobic and other workout cd's by the leading company on the European market (Alcas).
Missing the live audience he decided to focus on live mixing his favorite music again.