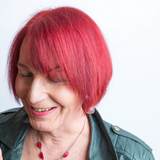 Never miss another
show from Jacki-E

Bookings:- adarkerwave@hotmail.com
Website:- https://adarkerwave.com/jacki-e
Producing her own mixes and tracks jacki-e, together with her partner p-mac, also have their own weekly radio show, A Darker Wave, every Saturday from 9 to 10pm on Radio Flintshire, playing the best in underground techno and deep house. They are Influenced by techno, deep house, jungle and dnb. and the ethos of the acid house raves and festivals of the early 90's. If you listen carefully you can hear the underlying stories which have influenced their music, in their preference for the darker edge of techno tech house and deep house.
2015 was the year in which jacki-e and p-mac spread their wings and played their first public dj sets.
Watch this space, there's lots more interesting music to come.