Jeff Wayne - Musical Version of The War of the Worlds (Full Album). 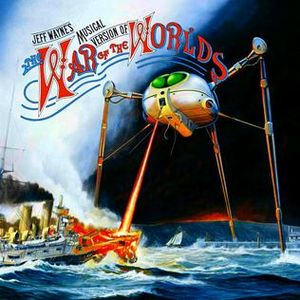 Jeff Wayne's Musical Version of The War of the Worlds is the debut studio album by Jeff Wayne, retelling the story of The War of the Worlds by H. G. Wells, released September 6, 1978. A concept album, its main format is progressive rock and string orchestra, using narration and leitmotifs to carry the story via rhyming melodic lyrics that express the feelings of the various characters.

thank you, i was looking for this for a while :)

Happy for you that you found it.

i still have this on vinyl,burtons voice . wow but i think the 2019 version is grt too hats off to jeff. liam neeson a same same haunting voice

Very nice vinyl to have in your collection.

That make two of us

Yesterday listened to some Jarre and Kraftwerk and I remembered this gem but I do not have it, so found it here - thanks Ivan :)

Glad you found it here funksoulbrotha

It's beautiful . Thank you in a brave new world

I heard it for the first time on vinyl. It was my dads. I loved it!! Had nightmares haha. But couldn't stop listening. Still love to hear it. Know every song by heart. Thanks!!!

Masterpiece is what it is and thank you for your comment.

Have the Vinyl LP, CD and Tape Recording of this. Just brilliant. Seen the live version, too and bought that original, too. They still bring me out in goosebumps whenever I hear it, whatever version it is. But thanks for this version too. When I hear Big Ben, it leads into Forever Autumn... Wow!!!

Quite the collection you have Brian..Nice one.

Nice to own on vinyl. I love this concept album.

Wow!! Thankyou Ivan. My big brother - who unfortunately I lost a few years ago introduced me to Forever Autumn. At the time I thought it was a very pretty song though wasn’t interested in hearing the rest. Now I’ve listened to the whole album and wish I had sat down to enjoy it with him💔 Now I understand why he loved this! Thanks again Ivan!

I'm sorry to hear about you're brother Lynette, I'm quite sure he is smiling down at you. And thank you for sharing this heartfelt message with me.