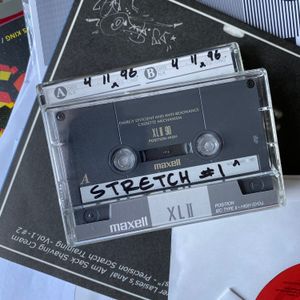 This show was 52nd in the global hip hop chart.

Here's a full show minus about 5 minutes or so at the very end.  Thanks to Nes once again providing me with some of the show that I missed (at the beginning).  Busy night this night.  After Stretch plays some Live Convention audio for the first 45 minutes him and Bob jump on the mic (45:12) to get the show officially started. Then music until 62:22 with La The Darkman interview/freestyle. At 87:07 they have Mister Cee, Paula Perry & Q for interview/freestyle. INI interview/freestyle at 112:32. At 156:22 they have writer Adario Strange for an interview and snap session. 179:09 interview/snap session with Mr. Mayhem then into a freestyle (191:20) with Lord Sear, Ghetto Communicator, A Butta & L-Swift. Then the end of the night phone calls start around 202:28 until the end of the show and that's where the laughter gets real.

the artist and song you mentioned. i can find it on youtube but on itunes it gives me another beat not that one on 2h35min. is this a remix?

The one on this radio show was the original version which was released as a promo only 12". They couldn't clear the sample.

aight! Thank you for the info, hope to hear more of this legendary shows!

Eclipse him self answer me ??? Nice one, a honour!

what song on 2h35min? Bomba that i don‘t know yet