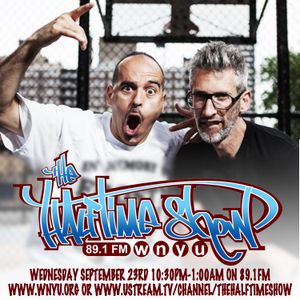 This show was 9th in the global hip hop chart.

To kick off their promotional campaign for their upcoming movie "Stretch & Bobbito: Radio That Changed Lives", the duo came by The Halftime Show to talk about the documentary and everything KCR related. As soon as the two of them were in the place together and we turned on the mics it was 1994 all over again (22:37). Jokes were flying, phone calls were taken and info was shared about the history of their come up. Even after Bobbito left, Stretch stayed and we had another discussion about his career as a DJ and the decline of his interest in the music that was being made in the late 90s, early 2000s (99:56). Additionally, I played all 90s Hip Hop on vinyl (3:46) (79:34) (126:31) and incorporated another WKCR alum, DJ Homicide aka Hungry Jack to help out with the instrumentals. The documentary is amazing and for information on it's release as well as anything Stretch & Bob related you can go to www.stretchandbobbito.com

Peace to yall at halftime show...

Thanks for the memory lane.

Viewing the film at central park with yall n everybody else after them performances was mad dope! Word...Life

great to hear you three together.

This my song here!! #RIP_Guru

LOL, they are terrible, LOLOLOL!!!!

Laughing laughing and more laughing all good. Still awesome show. Nice to hear all three of you Once again thank you for sharing. Peace.