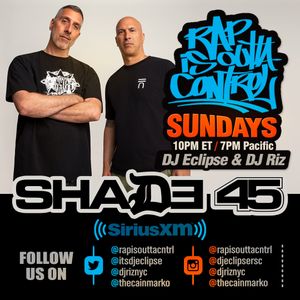 Gods Of The Basement (Big Zoo & Prolific Wone from End Of The Weak) and Double A.B. were our guests on this show.

Gods Of The Basement have a new self-titled album out which is available now on all streaming platforms. Also, this August, End Of The Weak will be celebrating 23 years of doing open mic events in NYC.

Double A.B. dropped "Devils & Drugs" last year and is working on two new albums. One with producer Git Beats and one with Nejma Nefertiti and producer Dub Sonata. New singles from both albums out now.

You can catch the show live every Sunday night on Shade 45 Sirius XM from 10pm - 12am EST with @itsdjeclipse & @djriznyc Playlists available at www.rapisouttacontrol.com/playlists