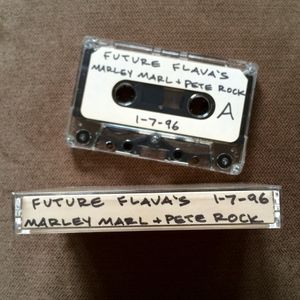 This show was 17th in the global hip hop chart.

From "In Control" to "Pirate Radio" to "Future Flavas", I don't think there was ever a better duo who were not only dope at what they did on air, but also responsible for a good percentage of the music we listened to back then. "Future Flavas" debuted in January of '95 on Hot 97 and aired on Sunday nights from 11pm-12am. Marley (mostly) on the mic and Pete Rock on the decks would bless us with weekly exclusives as well as impromptu freestyles and fresh radio promos. For example, peep out the Rakim joint (7:27) that for the life of me I do not recall ever hearing again. Then there's Pete's off-the-top freestyle sessions (5:46 & 55:55) as well as a dope Pete Rock produced Biz Markie promo (30:05). The great thing about listening to NYC radio shows like this one was that you were getting the music straight from the source. Songs would be recorded that week and played immediately without the wait of a label release or even the chance of ever hearing it again. Now that's exclusive.

Ibe been looking for that Biz Promo since. I remember where I was when this was on air. Dopeness!

crazy classic in the 96

word..Crime Fam had another nice joint on this compilation http://www.discogs.com/Various-Young-Lord-Presents-The-Red-Book-Masters/release/669903

This is that real hip hop