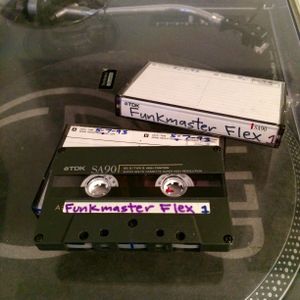 This show was 2nd in the global hip hop chart.

So far most of the 90s mix shows I've posted here have been specialty shows that were found on non-commercial stations and focused on songs you probably wouldn't hear on mainstream radio. Funkmaster Flex was given an opportunity back in 1993 to start a Friday night mix show on Hot 97 which ran from 11pm-2am. His show was based more on what was popping commercially, but in the clubs and streets. What's most interesting about this particular show is to see how much commercial music has changed from 1993 to now. The show starts with a dope Cold Crush Brothers promo for Flex followed by a mixture of joints from names like Onyx, Kool G Rap, Brand Nubian, Zhigge and Redman. Within the 3 hours Flex also spins Reggae (52:46), Old School (66:09) and has freestyle appearances from Double XX Posse (75:11) and Rampage (124:53). So sit back and enjoy the music and Palladium references along with Angie Martinez, Overseer Salaam (Remi) and the man who is still the king of radio 22 years later.

Dj Eclipse thanks for posting all your tapes its much appreciated

Yo! I gotta give props to you, man. Thanks for uploading all these shows. So dope. Takes me back.

SEAN HIPHOP ON FIRE3y ago

nothing quite like a trip down memorylane ,
use to love when flex and tim westwood hooked up for a live show .

Dope, I cant get enough

I feel like I'm in a Jeep Wrangler with one leg out rockin Timz cruisin' thru NY with a bad bitch behind the wheel.