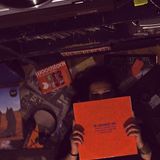 Never miss another
show from Isabel Maria#Songs To Nowhere

Isabel Maria is a music lover, plain as this.
Portuguese and living in Lisbon devoting all her spear time to music
she loves and occasionally djing, but always feeling the need to exchange
more information she was driven to create her own mixcloud in 2014,
after experiencing Reverence Valada.

After that event, she started to create mixtapes whenever she felt that there were songs that she wanted to share.

That work allowed her to work with Caleidosocopio Radio,

where for a whole year she cruised the skies
every week with her Voyage Dans La Lune,

almost exclusively devoted to psychedelia.
Creating mixtapes led to another invitation
reviewing concerts and interviewing bands with Musica em DX.
Her blog Songs to Nowhere
started as a repository of all her stuff, mixclouds, playlists, interviews, and reviews,
and in 2018 Songs To Nowhere also became a show at
Trendkill Radio and is now growing day by day with its own material!