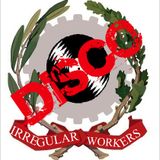 Even though they came from different parts of Italy, genetically work addicted, with the help of the internet and their musical feeling , they manage their own Disco Volante Records, and they released lot of tracks and remix on different labels.

Dancefloor policy of Irregular Disco Workers is oriented on a powerful mixture between Disco, House and Electronica.

They played in underground clubs in Verona, Firenze, Paris, Moscow and many more.