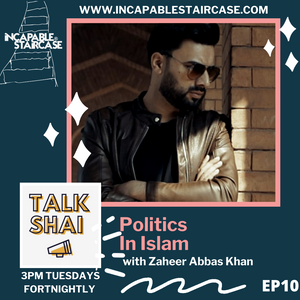 For the concluding part of the "In Islam" series, I'm speaking to singer/composer Zaheer Abbas Khan about the ever-evolving politics of the religion. We touch on how Islam's laws evolved between the Quran, Hadith and Shariah, how kingdoms rose and fell, and where we're at now with the powerspread amongst Islamic countries.

We also discuss their complete ineptitude against injustices and cover both the ways Islam has been demonised and where criticism is warranted. Difficult conversations to be had, but they should be had nonetheless.

Zaheer is a BBC Introducing Artist, a classically-trained musician and penned the beautiful score for my short film, The Waving Man, which is shortly premiering at the UK Asian Film Festival. Find him on Instagram @zaheerabbaskhan and on Twitter @zaheerabbaskh18