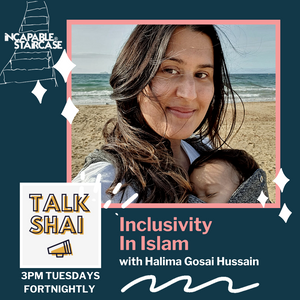 Rebranding the show (since there is neither being much mashed up nor in), kicking off with an episode on discussing inclusivity in Islam - something that gets a seriously bad rep in the mainstream media.

To break down these perceptions, I'll be speaking to Halima Gosai Hussain, Chair of the Inclusive Mosque Initiative, a radical women-led organisation that creates alternative spaces for Muslim prayer that centre the voices of those who are often marginalised in mainstream spaces.

Also a recent TEDx UCLWomen speaker, Halima birthed Lyla Audre during the first 2020 lockdown and is coming to terms with what being a 'parent in patriarchy' demands. And hipster turmeric lattes annoy her.

Find Halima on insta and twitter at @halimagosh and the Inclusive Mosque Initiative at inclusivemosque.