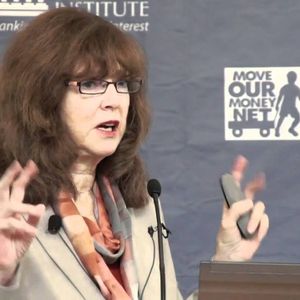 Ellen Brown is founder and president of the Public Banking Institute, a nonpartisan think tank devoted to the creation of a publicly ran banking system. Author of more than 12 books, Ellen obtained her JD from UCLA where she served as Book Review Editor. Prior to that she was an English major at CAL Berkeley.

Ellen practiced law as a civil litigation attorney in Los Angeles for 10 years and ran for CA State Treasurer in 2014. She has appeared on numerous cable, radio and television programs. Of note, Fox Business Network with Neil McCluskey of the Cato Institute and the Russian Network (RT) where she addressed derivatives and debt. Her opinion piece: "Public Banks are Key to Capitalism", appeared in the New York Times in 2013. Additionally, Ellen has authored 12 books. Ellen joins program to discuss current condition of economy, the banking system and her best selling book: Web of Debt.