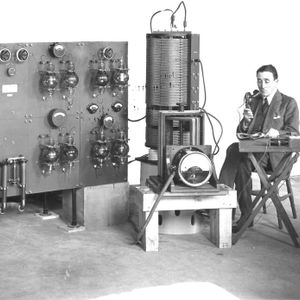 Discover the history of the first ever official radio entertainment broadcast, on the 15th June 1920! On that day, Dame Nellie Melba held a live radio concert, broadcast and heard around the World, due to the pioneering efforts of Guglielmo Marconi, and the technological achievements made at his New Street Works in Chelmsford.

In a special documentary, produced by Craig Greenslade; Ex-Marconi Engineer and Radio Historian - Tim Wander recounts the great historical events and people, including Marconi himself, that led the way to this momentous day.

As well as Dame Nellie Melba's famous concert, the programme also looks across its larger legacy, including the first regular entertainment radio station - 2 Emma Toc (2MT), and the invention of the BBC in 1922.

Special Thanks to Tim Wander, and the Essex Record Office.